You likely heard about how well Yorshiro Mori, who recently departed the Japanese Olympic Committee, came across when he voiced his 'concerns' about female representation in high profile meetings by lamenting ‘When you increase the number of female executive members, if their speaking time isn’t restricted to a certain extent, they have difficulty finishing, which is annoying.” Galling stuff! 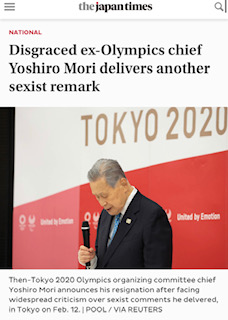 He was expressing a frustration far too many men seem to feel, borne out of their assumption the people to really listen to in meetings are the just guys. This sense of being ‘ignored’ if not outright silenced, as per Mori’s preference, is something many of my coaching clients have felt at work.

However, its nonsensical. After all,  you'll often hear women advised to 'Find their voice’ or to ’Speak up for themselves’. The truth is women, or at least the ones who haven’t had the misfortune to work with men like Mori do indeed use their voices. The problem is that too often, the audience in those meeting rooms just aren’t listening and often interrupt when women do speak. If this happens to you point out:


1. Women speak with shorter comments and less frequently. As I discussed in ’The Con Job’,  research shows that in university faculty meetings, men’s ‘turns’  took 11‒17 seconds on average compared to women’s 3‒10 seconds. This means that the longest vocal contribution by a woman, on average, is often still shorter than those made by their male colleagues. Other research in academic settings found men talk more often and for longer stretches at seminars, in discussions and full-class exchanges in the classroom. None of which is a surprise to many of my clients.

2. Jump back in. You may wonder if it’s worth the effort, but it does remind everyone else you were speaking. Try something like ‘I like the way John picked up on the point I was starting, but I wanted to additionally say…’ or even simply 'Just finishing my point...'

3. Use a smile to disarm. Annoyingly, women are expected to smile but do point out the obvious, that you were interrupted and that you weren’t finished. Try something like ‘I’m glad John is enthusiastic, but what I was going to say was ….’

Clearly, no one likes being interrupted, but if it stops you from making your point, it diminishes you. Worse yet, it also stops everyone else from hearing your perspective - likely to be different from the Mori's of the world, who I suspect ensure they are always heard. That's just my perspective, so share with me how you respond when you've been interrupted as there are plenty of ways to ensure you're being heard.